Don't you think it's time? is today's DJ piece by 4/2's Justice Raphael, which explores the use of contractions in legal writing. The Scalia view is "do not" and the Garner view is "If you'd say it as a contraction, then write it that way." Justice Raphael writes:

I use contractions in articles like this one without a second thought. And no reader would care, or even notice. 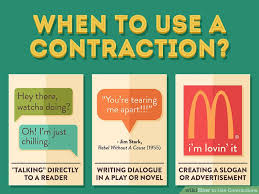 But that doesn't mean that I have used them in briefs when I worked as an appellate lawyer, nor in opinions as a justice on our state Court of Appeal.

Why not? For the same reason I would wear a suit-and-tie to most work events, even if more casual dress might be appropriate: You can't go wrong being formal. As long as there remain judges with Scalia's view [against contractions], why would a lawyer want to risk upsetting them with her wording? If a justice has colleagues or readers who think contractions inappropriate, why risk alienating them?

But, in 2019, how many readers would actually be put off by contractions in formal legal writing? This is an empirical question to which I don't know the answer.

He goes on to point out that SCOTUS justices generally avoid contractions, though Justices Gorsuch and Kagan have "donned informal grammatical attire." And many Ninth Circuit judges "have been freely using contractions for years."

In other 9th Circuit news: Ninth Circuit Judge M. Margaret McKeown to Receive ABA’s John Marshall Award -- Judge M. Margaret McKeown is the recipient of the prestigious John Marshall Award, presented by the American Bar Association’s Judicial Division and the Standing Committee on the American Judicial System. Judge McKeown will receive the award on August 9th during the ABA’s annual meeting at the Nikko Hotel in San Francisco. Past recipients include retired Justices Sandra Day O’Connor and Anthony M. Kennedy of the U.S. Supreme Court, and then-Chief Justice Ronald M. George of the California Supreme Court. Judge McKeown is the first Ninth Circuit judge to receive the award.

And the latest in the CJP proceedings here (and in the DJ under Women Describe Fear of Retaliation By Powerful Justice)
Posted by Ben Shatz (SCAN) at 8:39 AM