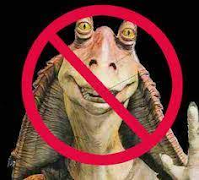 From our "even dorks gotta draw the line somewhere" file: Who cites  to the Phantom Menace?? Well, apparently Magistrate Judge Jeffrey Cummings (N.D. Ill.) is a fan, quoting Jedi Master Qui-Gon Jinn, in an R&R here.

The U.S. Supreme Court will maintain its current COVID-19 protocols this month through what is typically the final oral argument session of the term, once again limiting those present to attorneys, court staff and press.

Since the fall, the justices have been hearing cases in person, but they have closed the proceedings to members of the public. The court has instead continued its practice of livestreaming audio from arguments, which it began at the outset of the pandemic. Those protocols will remain in place for the two-week oral argument session beginning Monday, April 18, and ending on Wednesday, April 27.