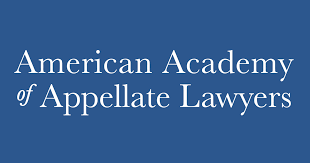 The Spring Meeting of the American Academy of Appellate Lawyers was March 31 to April 2 in Pasadena (rescheduled from 2020). Not surprisingly, a large contingent of California appellate lawyers and judges/justices were involved as speakers, including Kathleen Sullivan, Jeffrey Fisher, Peter Stris, Laura Brill, Richard Hasen, Ted Boutrous, Kirk Jenkins, Justice Ming Chin (ret.), Justice Margaret Grignon (ret.), and 9th Circuit Judges Wardlaw, Nguyen, Owens, and Lee. Two Californians were inducted in person as new Fellows: Laura Brill and Laurie Hepler. (Sean SeLegue is also a new Fellow from California, but did not attend.) The luncheon speaker was Rollins Emerson, the Ninth Circuit's Archivist (yes, this is a newly created position), who discussed the amazing history of the 9th Circuit's courthouse in Pasadena. Professors Jeffrey Fisher (Stanford) and Allison Orr Larson (William & Mary) were awarded the 2018-2019 Eisenberg Prize for their article Virtual Briefing at the Supreme Court, 105 Cornell L.Rev. 85 (2019). A presentation was also made by H&L's John Taylor honoring former Fellow Ellis Horvitz. 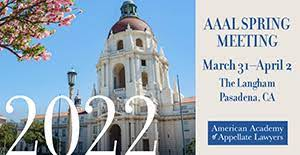 Also the AAAL's 2022 Kathleen McCree Lewis Award (to honor individuals who have made exceptional contributes to the delivery of appellate justice within the past three years) was presented posthumously to Charlie Bird (a former AAAL and CAAL president) in recognition of his many appellate accomplishments and "perhaps his most lasting contribution to appellate practice," the publication of his book Advanced Topics in Appellate Practice: The Path of Mastery. "Charlie's ground-breaking book is the crowning act of his long service to the appellate bar, and alone merits the recognition of this prestigious award."