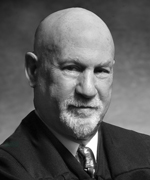 "I think I realize that being an appellate judge, or maybe any kind of judge, in California in the 21st century is an incredibly good window on the human condition," Presiding Justice J. Anthony Kline of the First District Court of Appeal said. "There's almost nothing that doesn't get into the court."

Kline has not set future plans yet. He has a piece of property in Marin County that he said he’d like to develop with his two sons. He wants to read more, cook more and think more about the “so many destabilizing things happening in the world today.”

“I’m leaving because I don’t have a lot of time left,” he said. “I’m 83. I am going to find other work that is socially useful that I find fulfilling but not as demanding.”
“The whole notion, to me, of private judging is an oxymoron,” Kline said. “The increasing number of disputes that are being decided in private arbitration behind closed doors is undermining public justice.” ... “I don’t think people understand the significance of having independent courts,” he said.
[The 11/5/21 DJ story is Anthony Kline, state's senior appellate justice, announces retirement
“I’m 83 years old. I’m the senior presiding justice in the state. That’s not because I’m smart; it’s just because I’m old. It’s a brief period that we have on this lugubrious orb.”]
Posted by Ben Shatz (SCAN) at 6:48 PM