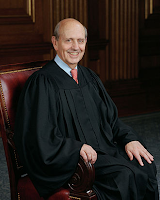 Yesterday, Justice Breyer gave the Scalia Lecture at Harvard Law School, a two-hour address, titled "The Authority of the Court and the Peril of Politics," available here and reported on widely, including on Law.com: Adding Justices Would Cause 'Eroding' of Trust in High Court, Breyer Asserts -- "I hope and expect that the court will retain its authority, an authority that my stories have shown was hard-won. But that authority, like the rule of law, depends on trust," Justice Breyer said.