In A Really Good Soul, today's DJ profiles 4/1's Justice Dato. The article explains that no one was surprised that he ended up on the Court of Appeal: He clerked fro Supreme Court Justices Rose Bird and Matthew Tobriner, and was a research attorney for a decade to Justice Howard Wiener. “Bill has an aptitude for the law. He can identify issues, and he can see past to the solution as quickly if not more quickly than anybody I’ve ever encountered,” Wiener said. “He has an impeccable value system. He’s very hardworking. He’s nice to be with. He’s never in your face in terms of ‘I’m smarter than you; why don’t you do this?’” Wiener said.


"Off the bench, Dato is an avid baseball fan and dedicated family man. He plays on a club softball team and shares San Diego Padres season tickets. He and his wife, Debbie, met in junior high school. They have four children, including a son who is an attorney in New York and a daughter who begins at Duke University School of Law this fall. Dato also is dedicated to San Diego’s legal community. When he joined the bench in February 2017, Williams invited him to an American Inn of the Court chapter Williams founded that focuses entirely on appellate work. Dato has been a steady presence ever since." 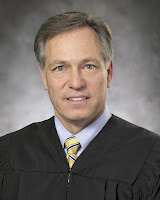 “You listen to everyone. You don’t make up your mind. You don’t make snap judgments about things. You give everybody an opportunity to be heard”
Posted by Ben Shatz (SCAN) at 9:20 AM